“I Will Maintain” is the official Dutch motto while Prince William I Of Orange, aka Silent William, is considered the country founder thanks to his leadership in the Dutch Revolt against the Spanish Habsburgs that set off the Eighty Years’ War in the 16th and the 17th century which resulted in the formal independence of the United Provinces in 1581. The 5th of May is celebrated as the national day as it is the Dutch liberation day from Nazi occupation in 1945. Additionally, the famous Dutch artist and painter Vincent Van Gogh is considered the national hero. The national color of the Netherlands is orange, which created the nickname the oranges for the country. The Dutch flag consists of red, white, and blue horizontal bands from top to bottom.

The national animal of the country is the lion which is shown on the national emblem with crowns. Another symbol animal and also the national bird is the Black-Tailed Godwit. The Netherlands are known for their fantastic tulips which grow everywhere in the country making them a significant country symbol. Another symbol is the national tree which is considered to be The Witch Tree. The traditional Dutch dish, Stamppot, made from potatoes mashed with one or several vegetables, is the country’s national dish, along with the Jenever, the juniper-flavored traditional liquor, as the national drink. The Dam Square in the capital, Amsterdam, is one of the important places in the country, with the national monument in the middle. The national mausoleum is the Huis Doorn in the city of Doorn, which was made in the 9th century.

Joost Van Den Vondel and Jacob Cats, the 16th-century poets, are referred to as Dutch national poets. The fiddle is the national instrument, while the national dance is called Santoso. Skirts and trousers are considered national dresses. The national sport is football which the Dutch are pretty famous for their unique style of playing and many famous players. The Dutch national airline is called KLM Royal Dutch Airlines. The National animal of Netherlands is Asiatic Lion

The National flower of Netherlands is Tulips. Botanical name is Tulipa. 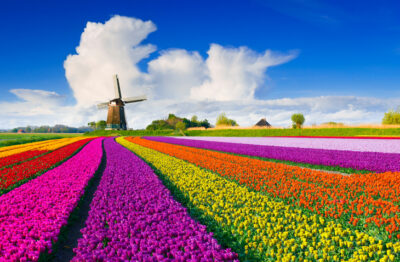 The National bird of Netherlands is Black-tailed Godwit Rest of the National symbols of Netherlands 👇

Compare Netherlands with other countries

Compare Netherlands with its neighbours How to pronounce Netherlands