Montana is the constituent state in the Mountain West sub-region of the Western United States. Montana is derived from the Spanish word “montaña”, which means “mountainous”. This is due to the state’s abundance of mountains, which include at least 300 peaks that are taller than 9,600 feet. In the 1800s, the mountains of Montana produced a huge treasure of gold and silver resources, earning the state the nickname Treasure State. Because of its wide-open landscapes and skies, Montana is also known as Big Sky Country.

Various Native American tribes, including the Cheyenne, Blackfoot, Kutenai, and Crow, lived in the area at the time of European colonization. The majority of Montana was acquired by the United States as part of the Louisiana Purchase in 1803. This territory was mostly unknown to outsiders until the Lewis and Clark Expedition (1804–06). Settlers discovered gold more than 50 years later. With its rapidly growing population and mining potential, the region was designated as a U.S. territory in 1864. On November 8, 1889, Montana became the 41st state to join the union.

It is bordered on the west by Idaho, on the east by North Dakota and South Dakota, on the south by Wyoming, and on the north by the Canadian provinces of Alberta, British Columbia, and Saskatchewan.

Montana serves as the only state in the United States with three divisions, which permits water to flow into the Pacific, Atlantic, and Hudson Bay.

Helena is the state’s capital.

Yellowstone National Park – the world’s first national park – has its original entrance in Gardiner, Montana, which was built in 1903. The park experiences 1000-3000 earthquakes every year and is home to one of the Earth’s few super volcanoes.

The grizzly bear population in Montana is the highest among the lower forty-eight states. In 1983, Montana declared the grizzly bear its official state animal.

Copper, gold, silver, and sapphires were once Montana’s primary natural resources. Petroleum is now one of the state’s most valued resources. The state is also the world’s top producer of talc, commonly known as talcum powder.

The fun fact is the famous abandoned town in Montana. Bannack is a deserted town located in Beaverhead County in Montana. Bannack was the state’s first territorial capital. The town was formed in 1862 after a large-scale gold discovery and was named after the local Bannock Native Americans. While it remained a mining town for many decades, Bannack was completely abandoned by the 1970s. Bannack is still preserved as a ghost town.

In 1931, the Western meadowlark was recognized as the state’s official bird. The official state flower of Montana is Bitterroot.

In 1995, Montana declared English the official language of the state. 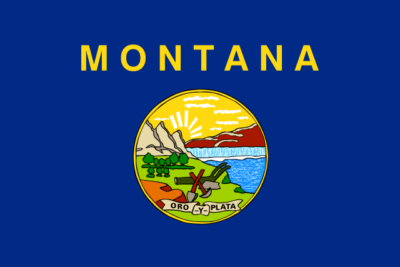